WHEN VESSELS TORMENT THE NERVES

Cranial nerve compression syndromes are caused by a neurovascular conflict, where there is mechanical irritation of cranial nerves by a vessel. Cranial nerves have an insulation from other cells, which takes place in their progression outside the brain as within the brain tissue. Cranial nerves are particularly

sensitive in the transition area between these two insulating layers. If a pulsating artery or, more rarely, a larger vein is located here, a compression syndrome can occur.

The trigeminal nerve is most frequently affected. Patients have severe pain attacks in one half of their face; these can be triggered by chewing, talking or brushing their teeth. The second most common cranial nerve compression syndrome is the facial hemispasm. This presents as the involuntary twitching of one half of the face. Other syndromes are vestibular paroxysmia with attacks of dizziness, or glossopharyngeal neuralgia with pain attacks in the area of the ear and throat.

Our centre treats all types of cranial nerve compression syndromes. Through our close interdisciplinary cooperation with neuroradiologists, oncologists and radiotherapists in the ENDOMIN NETWORK, we can provide treatment based on the latest medical findings using all available methods.

In the following sections, you will find information about the most common types of cerebrovascular diseases, their symptoms, diagnostics and treatment options, as well as explanations about the special techniques and treatment strategies used at our centre. 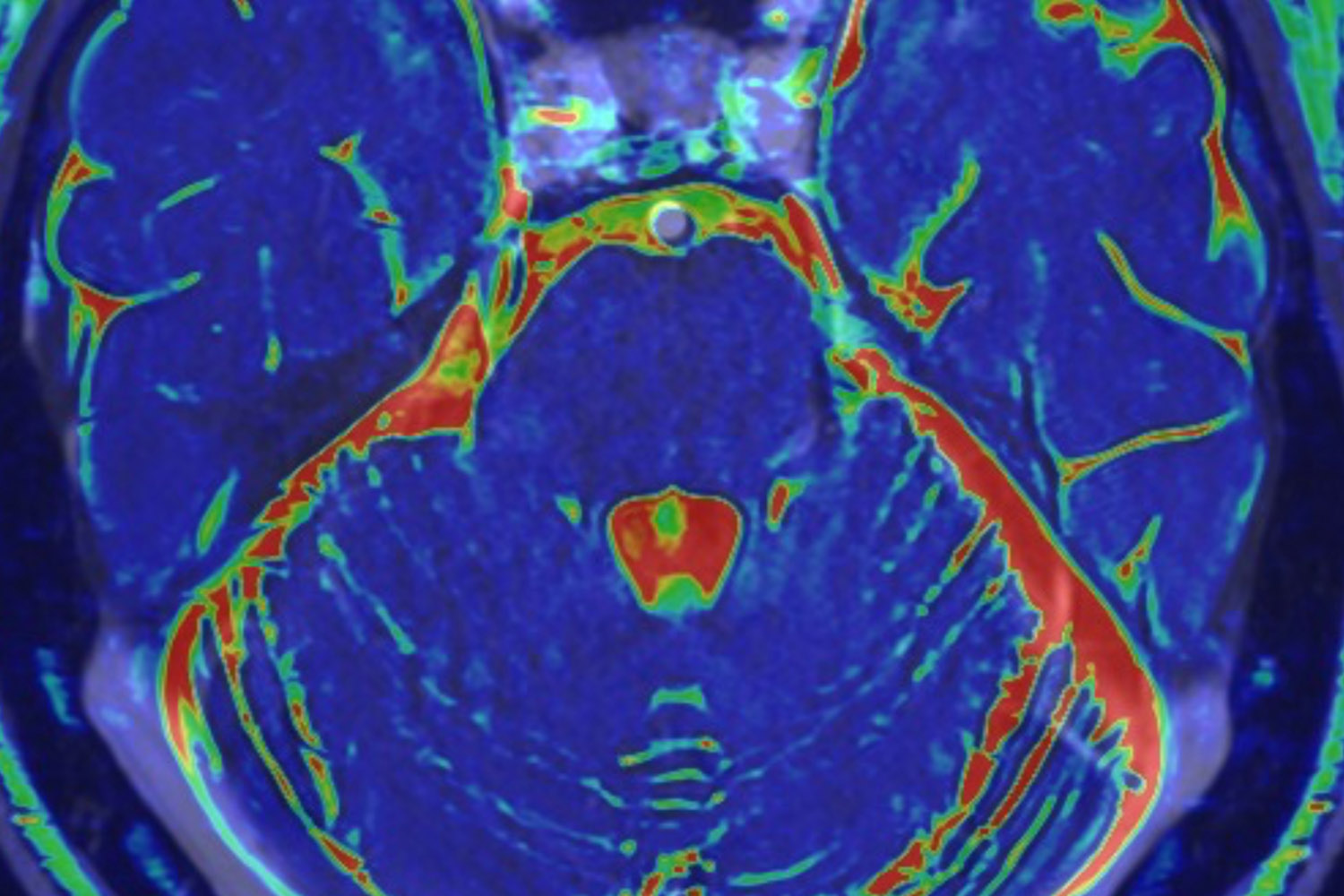 Trigeminal neuralgia (TN) is a darting, shooting pain in the face, in the area supplied by one or more branches of the facial sensory nerve (the trigeminal nerve). According to the current classification of the International Headache Society (IHS), there are two forms of TN. This differentiation is of great importance in terms of the timing and selection of invasive treatment methods.

The classic form of TN, previously also called idiopathic, is usually triggered by the vascular compression of the trigeminal nerve through the superior cerebellar artery. The symptoms usually only appear after the age of 50. Annually, it affects 5.9 out of every 100,000 of the female population and 3.9 per 100,000 males. The second and third trigeminal branches are most common alone (18% or 15%) or combined (approx. 40%).

Symptomatic TN is triggered by masses or demyelinating diseases, such as multiple sclerosis. Lesions in the brain stem, such as cavernomas, cause irritation of the cranial nerve nuclei; other space-occupying lesions, such as acoustic neuromas and meningiomas, can cause direct nerve displacement. Typically the first occurrence presents before the age of 40, much more frequently there is an attack on the first trigeminal branch, as well as bilateral nerve pain.

The pain attacks last for seconds or minutes and are typically triggered by stimuli such as touch, chewing, speaking, swallowing or brushing the teeth. The pain is so excruciating that in severe cases it is no longer possible to eat. On a pain scale of 1-10, the intensity is at the highest level. Pain attacks are often followed by vegetative symptoms such as redness and secretion from the tear, nasal and/or saliva glands. The attacks can occur several times a day for weeks and months. There may be pain-free intervals lasting weeks or months, but the individual trigger mechanism can cause new symptoms at any time. As a rule, the intensity increases and destroys the quality of life.

The diagnosis of TN is based on the typical symptoms. At each initial diagnosis, an MRI examination is indicated. Contrast-enhanced imaging can detect, or, in most cases rule out, symptomatic TN. Using modern T2 thin-film technology (CISS sequences), the pathological neurovascular contact can be detected in the classical form.

Therapy has evolved significantly in recent years. On the one hand, modern imaging has made it easier to secure the diagnosis. On the other hand, long experience with conservative and surgical methods have made it possible to define an optimal treatment pathway based on the cause of the suffering and the condition of the patient. An individual treatment concept with interdisciplinary patient care is the key to long-term therapeutic success. With symptomatic TN, the primary disease is treated. With classic TN, conservative drug therapy comes to the fore, and, due to the short duration of the attacks, this is usually a prophylaxis. The drugs must be selected and dosed individually. The dosage will be increased until satisfactory freedom from pain is achieved or intolerable side effects occur.

A surgical procedure should always be considered if long-term drug therapy leads to side effects or only achieves insufficient results. In general, destructive-ablative and function-preserving methods are available.

The ablative method causes thermal, chemical or mechanical damage to the trigeminal nerve. However, the special feature of treatment at our centre is not a destructive, but a function-preserving procedure: endoscopic microvascular decompression. The neurovascular conflict is remedied microsurgically and a curative solution is sought. The trigeminal nerve is exposed using a purely endoscopic technique, through a tiny keyhole-like opening behind the ear. At the nerve entry zone, the neurovascular conflict is identified with the aid of neuronavigation and the compressing vessel is detached from the nerve. By inserting a teflon piece, the nerve is then padded against the vessel, and the functions of the brain stem and the basal cranial nerves are tested with continuous electrophysiological monitoring.

A particularly high success rate has been reported in recent years through the use of navigation-assisted, minimally invasive endoscopic methods. The essential advantage of endoscopy is that the site of the conflict can be represented particularly well and the decompression can be reliably assessed. Recurrences are rare with this disease, and definitive healing can be assumed in more than 90-95% of cases.

Hemifacial spasm refers to involuntary, sudden shooting, one-sided tonic-clonic cramps of the facial muscles. The spasms last seconds to minutes, but in severe cases they can also be present continuously. The cause is a pulsating compression of the facial motor nerve (nervus facialis) by a vascular loop, usually through the anterior inferior cerebellar artery. The constant pulsations damage the nerve root, leading to spontaneous discharges and triggering spasms.

There are no pain or sensitivity disorders, but the disfiguring spasms clearly cause suffering.

The diagnosis is based on the typical symptoms. At each initial diagnosis, an MRI examination is indicated. Using modern T2 thin-film technology (CISS sequences), the pathological neurovascular contact can be detected in the classic form of the disease.

Initially, a conservative treatment is usually attempted. Botox injections paralyze the affected muscles, suppressing the spasms. If the treatment is unsuccessful or intolerable, neurosurgical treatment offers excellent chances of recovery with a low surgical risk.

At our centre, the operation is performed with navigation-supported endoscopic-assisted microsurgical technology. The facial nerve is exposed through a tiny keyhole-like opening in the skull behind the ear. The compressing vessel is detached from the nerve root and kept away with a small teflon implant. The padding step is always checked using the endoscope. The functions of the brain stem and the affected nerves are continuously checked using neuromonitoring. Microvascular decompression is a causal therapy, when the cause of the disease is corrected. Medical literature reports a particularly high success rate with the use of navigation-based endoscopic methods, with up to 85% freedom from symptoms. At our centre, we have managed to achieve a 100% success rate in the last 5 years!

Compared to trigeminal neuralgia, which occurs far less frequently, glossopharyngeal neuralgia is characterised by seizure-like pain on one side of the throat and tongue. It mainly affects older people, the disease is evenly distributed across the sexes, and in recent research papers the incidence has been described as 0.2-0.7 per 100,000 per year.

The disease is usually caused by a conflict between a vascular loop and the glossopharyngeal nerve (9th cranial nerve). Occasionally, the cause is a tumour in the area of the brain stem, and rarely can no explanatory pathology be found. In some patients, the disease occurs in combination with trigeminal neuralgia.

The typical symptoms are destructive triggerable pain at the base of the tongue, palate and throat. Swallowing, speaking, coughing, but also simple tongue movements are described as the triggering factors.

The diagnosis is based on the typical symptoms. If other pathologies such as tumours in the pharynx can be ruled out, an MRI examination is indicated. Using modern T2 thin-film technology (CISS sequences), the pathological neurovascular contact can be detected in the classic form of the disease.

Also with this disease, the focus will usually be on drug therapy. However, conventional painkillers such as non-steroidal anti-inflammatory drugs (such as

ibuprofen and paracetamol) are rarely effective. Usually, the same medications are used as for trigeminal neuralgia. A microsurgical operation is performed if the medicating treatment does not lead to the desired success. Thin-film MRI may be used to identify the vascular nerve conflict as the cause of the symptoms.

The aim of this microsurgical procedure is to resolve the neurovascular conflict. Similar to trigeminal neuralgia, the contact surface between the nerve and the vessel is padded with teflon wadding or pieces of muscle. If the indication is correctly presented, the operation has a high chance of success, with comparatively low stress for the patient and an acceptable surgical risk. According to current studies, the overall mortality is described at 0.3% and the risk of a new neurological deficit at 1.7%.

At our centre, the operation is performed with navigation-supported endoscopic-assisted microsurgical technology. The facial nerve is exposed through a tiny keyhole-like opening in the skull behind the ear. The compressing vessel is detached from the nerve root and kept away with a small teflon pad. The undercushioning is always checked with the endoscope, while the functions of the brain stem and the affected nerves are continuously checked by means of neuromonitoring. Microvascular decompression is a causal therapy, when the cause of the disease is corrected. If the indication is correctly presented, the operation has a high chance of success, with comparatively low stress for the patient and an acceptable surgical risk.

Arrange an
appointment with us! 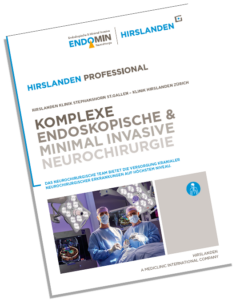 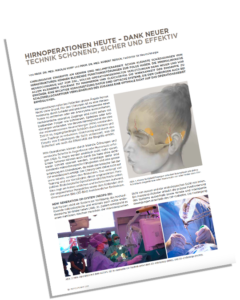 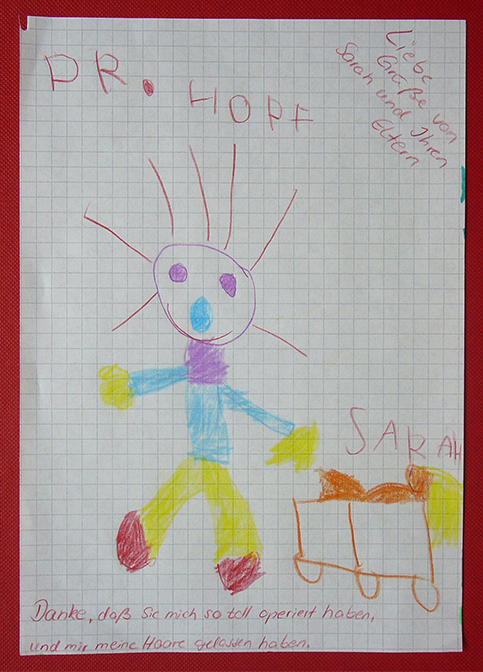 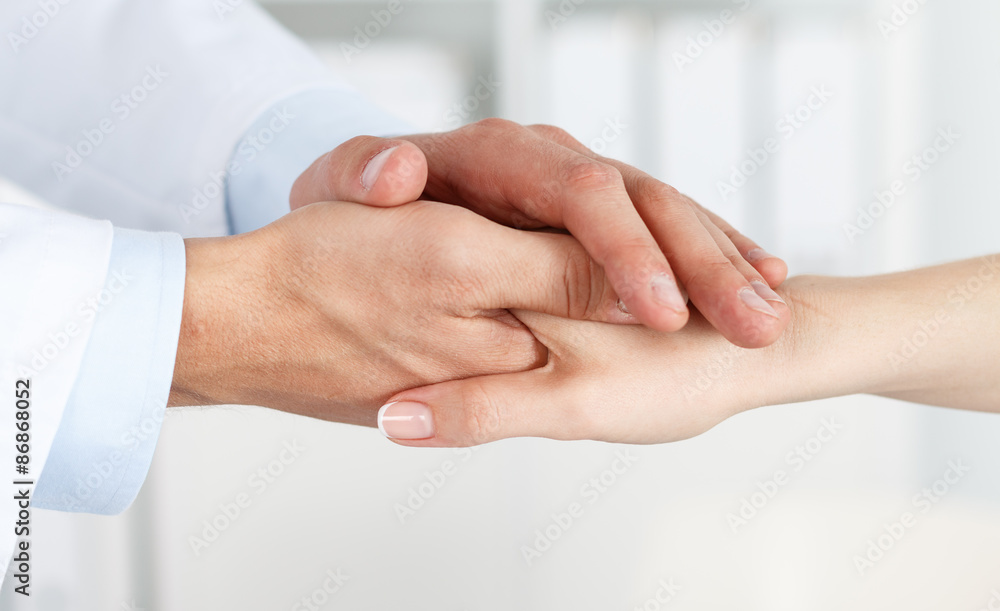